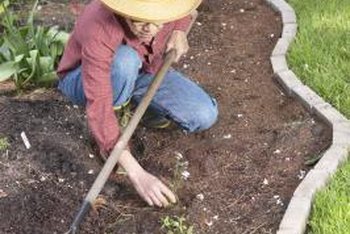 How and when you pull weeds influences how long it will take to kill them once and for all. Weeds are easiest to pull when the plants are small and the soil is moist. Young weeds have not yet established their root system, so it’s easier to pull the entire root. Annuals are often easy to remove the first time around, but any pieces of perennial weeds that are left behind may resprout. For this reason, it may be better to dig these roots out with a garden trowel or a dandelion digger so that you can see the entire root. Remove as much of the root system as you can find. It’s easy to miss tiny pieces, so you may have to repeat digging perennial roots several times before you eradicate the entire weed.

Weeds are opportunistic and will infiltrate open spaces in your landscape where they find warmth, sunlight and moisture. By denying any one of these things, you can prevent their growth. Fill spaces empty spaces in your landscape with mulch or desirable vegetation to take away the space weeds need to grow. Organic mulches, such as chopped leaves, wood chips, compost or grass clippings, or inorganic mulches such as gravel, landscape fabric or black plastic, block sunlight and warmth to prevent weed growth in flower beds and around trees and shrubs.

Hand-pulling can be an effective solution to remove weeds in the garden, but pulling out the root doesn’t always kill the entire weed. Different weeds require different control measures, and while one weed may be killed by pulling the root the first time, another isn’t quite as easily eradicated.

Perennial weeds live for two or more years and will grow as long as conditions are favorable. They don’t set seed as fast as annual weeds, but their root systems are often extensive. Some perennial weeds spread by seed, while others spread from root pieces or from stems that root as they creep along the ground. If you allow perennial weeds enough time to grow, removing the entire root by hand-pulling may be impossible. Weeds such as dandelions (Taraxacum officinale), which are hardy to U.S. Department of Agriculture plant hardiness zones 3 through 9, can regrow from even a tiny fraction of root left in the soil. Perennial weeds can be killed, though, if you pull them while they’re young. Mature perennial weeds require repeated pulling to exhaust the root and eventually kill the plant.

Annual weeds such as crabgrass (Digitaria spp.) and common chickweed (Stellaria media) complete their life cycle in a single growing season. Some annual weeds can do this in a matter of weeks and produce several generations per year. To kill these weeds, you must pull them as soon as possible after germination so they don’t have the chance to set seed. Summer annual weeds like crabgrass germinate in the spring and continue to grow throughout the summer. Winter annual weeds like common chickweed germinate in late summer and early fall. They overwinter as green, dormant plants and produce seed in the spring or summer. These weeds usually die with the arrival of warm weather.

Renee Miller began writing professionally in 2008, contributing to websites and the "Community Press" newspaper. She is co-founder of On Fiction Writing, a website for writers. Miller holds a diploma in social services from Clarke College in Belleville, Ontario.

Weed size is critical when timing herbicide applications, but do you know how long it takes for a weed to go from almost too small to see – to too big to kill? Here’s a visual example. To begin, the plot was cleared of weeds, without disturbing the soil surface. CHUs (Crop Heat Units) and GDDs (Growing Degree Days) were calculated based on soil temperatures (in Celcius), using a base temperature of 2°C.