Harvest time keeps growers excited, especially given all the efforts exerted to produce healthy and quality buds. However, cutting them too soon will defeat the purpose and waste all your hard work as the tetrahydrocannabinol (THC) content will be low. So, harvest them at the right time based on the following indications:

In addition to Tribus, these nutrients are necessary when feeding cannabis plants.

One of the 10 steps to growing weed is providing just the right amount of nutrients per growth stage.

Reducing the humidity levels to 40% to 50% is needed during the flowering stage. You can make it 55% but never 60%. Also, the temperature can decrease to 68 to 78 degrees Fahrenheit. Then, in the latter part of the flowering period or one to two weeks prior to harvest, reduce humidity levels from 30% to 40%.

Did you know that providing your marijuana plants with sufficient carbon dioxide (CO2) helps improve their growth by 20%? CO2 is crucial in photosynthesis, where cannabis absorbs light and turns it into energy. Excessive CO2 or a lack of it can be detrimental to your cannabis plants. So, you should know how to provide them with the right CO2 levels. Ideally, it should be above 250 PPM.

Being able to produce cannabis on your own is one thing, but knowing how to grow high-quality cannabis is another. With more states legalizing marijuana use, you want to make sure you’re getting the highest quality buds. While achieving this can be challenging even for seasoned growers, our growing marijuana 101 can help you realize your goal. Read on to learn how to grow a marijuana plant from start to finish, including the secrets behind producing premium cannabis buds!

To supplement your plants with extra CO2, you can use the following:

When purchasing cannabis seeds, you might often choose the cheapest ones to save some bucks. However, the quality may be compromised, and you’ll end up spending more than you have to. That’s why you should pick cannabis seeds with the best genetics. Conduct your research so that you can buy from trusted cannabis seed banks. Cloning can be a good start too — just make sure to get the clones from reputable sources.

If you want to drop the humidity levels, perform these steps: 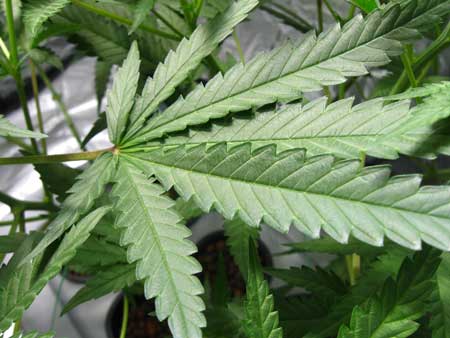 These Mandarin Cookies buds were listed as producing 25% THC. They and produced about that under HID grow lights but tested at 27% THC under the HLG 300. Several other clones from the grow also tested at higher THC than expected. This was only one grow comparison but so far the HLG seems to be the most “THC-increasing” grow light I’ve tried.

So as a really rough example, let’s say your strain/plant genetics can only produce 20% THC at most. That means you may get less than 15% THC in your buds if you don’t grow the plant right, but no matter what you do you’ll never be able to increase it above 20%.

Cannabis plants which have been allowed to grow for at least 8 weeks in the vegetative stage tend to be much bigger and more robust than plants switched earlier, and they produce far greater yields. But does that mean that they produce higher levels of THC? It seems like it could be possible, but it might also be related to other factors. For example, big plants are usually grown under powerful grow lights, which affects potency, and are also often grown by more experienced growers. More testing is needed!

The marijuana of old used to be classified as a hallucinogen and was thought to not cause addiction because there was no identified withdrawal syndrome. This has changed and with the increased potency of THC there is a definite recognized withdrawal syndrome which includes increased anger, irritability, depression, restlessness, headache, loss of appetite, insomnia and severe cravings for marijuana. 9 It has been reported that 9% of those who experiment with marijuana will become addicted; 17% of those who start using marijuana as teenagers will become addicted; and 25–50% of those who use daily will become addicted. 10 A 2015 study carried out in the UK found that high-potency cannabis use is associated with increased severity of dependence, especially in young people. 11

The active component in marijuana that people find so desirable was not really known until the 1960s when a research team in Israel found that after injecting THC into aggressive rhesus monkeys, they became calm and sedate. 1 This team discovered that there was a receptor in the brain that fit THC like a glove so they named these receptors cannabinoid receptors. It was not until the 1990s that this same team discovered why we have these receptors in our brain. 1 They discovered compounds produced by our bodies that fit into these receptors which they named anandamides, a Sanskrit word for “supreme joy.” These receptors are found all over the brain and are still called endocannabinoid receptors but that is not because they are meant for people to take in THC.

The primary problem with the current available cannabis in dispensaries in Colorado is that the THC content is not like it used to be. Prior to the 1990s it was less than 2%. In the 1990s it grew to 4%, and between 1995 and 2015 there has been a 212% increase in THC content in the marijuana flower. In 2017 the most popular strains found in dispensaries in Colorado had a range of THC content from 17–28% such as found in the popular strain named “Girl Scout Cookie.” 2 Sadly these plants producing high levels of THC are incapable of producing much CBD, the protective component of the plant so these strains have minimal CBD. For example the Girl Scout Cookie strain has only 0.09–0.2% CBD.

Marijuana use is also correlated with creating or worsening many mental health problems including anxiety, depression, psychosis, and suicidal ideation. A prospective study in Australia followed 1,600 girls for seven years starting before they expressed symptoms of mental illness or substance abuse. 21 They found that girls who used marijuana at least once a week were twice as likely to develop depression than those who did not use, and those who used marijuana every day were five times more likely to suffer from depression and anxiety than non-users. A study of 307 adults with depression assessed symptoms, functioning and marijuana use at baseline, and three- and six-month intervals. 22 Researchers found that marijuana use was associated with poor recovery. Those aged 50+ increased their marijuana use compared to the youngest age group (p<.001) and the marijuana use worsened depression (p<.001) and anxiety (p=.025) symptoms. Marijuana use led to poorer mental health functioning compared to those who did not use marijuana (p=.01).

According to the 2014 Monitoring the Future Study, marijuana is by far the number one drug abused by eighth and twelfth graders. 4 Since legalization in Colorado, marijuana use in adolescents and those 18–25 has steadily climbed, well outpacing the national average. Colorado leads the nation in first time marijuana use by those aged 12–17, representing a 65% increase in adolescent use since legalization. 5 According to the Colorado Department of Public Health and Environment in 2015 the county of Pueblo, Colorado, has the highest prevalence of reported past month marijuana use by high school students at 30.1%. 6 It is well documented that when drugs are perceived as harmful, drug use decreases as we have seen with adolescent use of tobacco. 7 There is significantly less perception of harm by marijuana primarily because Colorado has normalized it as a society and allowed the perception that it is “organic” and “healthy” and that there is nothing wrong with it.